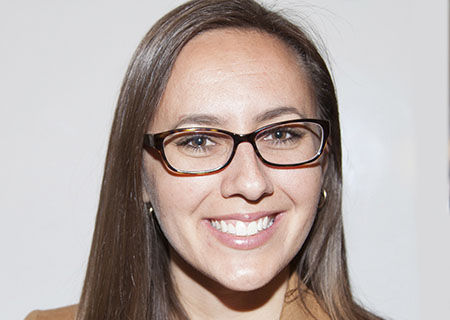 Superintendent of Schools Dr. Jill Gildea has announced the selection of Ms. Michele Giorlando DeRosa, English Language Arts and AVID teacher at Western Middle School, as the Greenwich Public Schools representative for the 2019 Connecticut Teacher of the Year program. Ms. Giorlando DeRosa will be recognized by the Board of Education at the June 14, 2018 meeting at Glenville School, 7:00 p.m.

Ms. Giorlando DeRosa is one of the six teachers selected and honored by the Distinguished Teachers Awards Committee this year in April. The Superintendent of Schools is charged with selecting from among the six Distinguished Teachers annually, the one teacher that will represent Greenwich in the State's program. Throughout the months of May and June, Dr. Gildea reviewed the nomination packets submitted for the Distinguished Teachers eligible for and participating in the District process for the State's program; spent time in each of their classrooms; and reviewed essays submitted as part of the selection process.

Mrs. Giorlando DeRosa began her career teaching English in 2010 at Promise Academy, Harlem Children's Zone in 2010. In the summer of 2014 she taught at the Nanjing Foreign Language School. She came to Western Middle School (WMS) in 2012, teaching English and the Advanced Learning Program (ALP) for grades 7-8. She also teaches the STEMinar and AVID electives for grade 7. Michele has coached the Modified Girls Soccer team since 2012, as well as the Quiz Bowl team since 2015. Her Quiz Bowl teams qualified for the National Quiz Bowl Tournaments in 2016, 2017, and 2018! She has been both the lead organizer for the Grade 8 Capstone Project, and the West Wind Literary Magazine editor and teacher liaison since 2012.

Michele epitomizes the concept of a life-long learner: Together with a science teacher colleague, Michele created the new interdisciplinary STEMinar class at WMS, receiving funding from a Greenwich Alliance Reaching Out Grant. To enhance her science knowledge, she enrolled in an American Museum of Natural History Climate Change class. After co-teaching an English Language Learning (ELL) class, and realizing her differentiating skills needed improvement, she sought out a summer professional development experience teaching English to students in Nanjing, China, an experience that equipped her with new strategies for ELL and regular instruction. Awarded a Fund For Teachers Fellowship Grant in 2016, she self-designed a course, traveling to meet teachers in Europe, to better understand how content relevant to her Grade 8 English unit was taught globally and provide her with hands on research experience. She received another fellowship to attend a Lincoln Center Aesthetic Immersion Program to discover new ways of delivering instruction by integrating the arts.

Mrs. Michele Giorlando DeRosa received a Bachelor of Arts degree in Writing with a Math minor from SUNY, Oswego, NY in 2008. She was on the Presidential Scholar and Dean's list all four years, and at graduation she was honored with the 2008 Helen Buckley Creative Writing Award. She received a Master's Degree in Teaching of English at Columbia University Teacher's College, New York, NY in 2010.

Back to Old Greenwich News