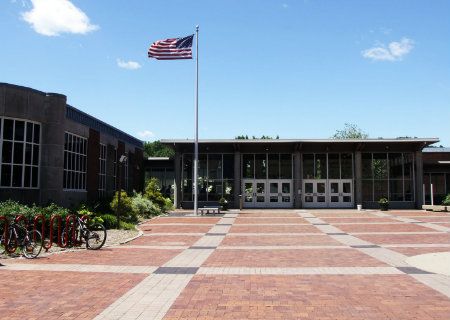 According to the conference website, "CMUNCE prides itself on departing from "traditional Model UN" through its highly dynamic crisis-style Model UN committees, which challenge delegates of all levels to think quickly and creatively in response to new scenarios and events."

Greenwich High School Teacher and Model UN Club Advisor Mr. Ian Tiedemann shared, "While I am thrilled to see how many students were formally recognized for their work at the conference, I am proud of all of our participants for the many weeks they spent researching their assigned roles and topics of their respective committees. The team leaders were especially critical to our success; they trained our newer members and supported them throughout the entire process. They have continued to operate as a close-knit team despite the ongoing challenges of the pandemic and digital learning. I am so proud of GHS Model UN!"

Award winners and their committees are listed below.

Several members of the GHS Model UN Club shared their experiences below:

"I liked discussing the issue of peace over defense and exploring the roles of both concepts while the nations of America and the USSR were teetering on the brink of a nuclear disaster. We had to make tough decisions about when to exercise restraint and when to move forward with military action in order to protect the nation, and it was a really wonderful experience to get to put myself in the shoes of a government official and think about the repercussions of every action taken by the administration in an effort to save the country."

"Crisis committees like those at CMUNCE are a little like rewriting history, one of the most engaging committees you can be a part of in the realm of Model UN. My committee took place during the 1992 presidential election, and it was super interesting to take on and "live through" the challenges that came with each campaign."

"MUN conferences are always a fun event that the whole club can get excited for. We prepare for weeks by researching and participating in drills during club meetings, but nothing compares to the fun we have at the actual conference. Even though this conference was digital, that didn't stop anyone in my committee from working hard to prove themselves by creating elaborate plans and have fun while they did so. I met many interesting people in my committee and greatly enjoyed learning more about the history of our nation's elections with them."

Divya Shenoy (Representative of Michigan at the US Constitutional Convention 2100), 10th Grade:

"Participating in the Columbia Model UN conferencing was a truly enriching experience that fostered interaction between students of different backgrounds and interests. Model UN is a great way to make connections with others from around the world, and despite the conference being virtual, I was able to communicate successfully with my fellow delegates. Participating in MUN takes some time getting used to as there are numerous logistics and procedural matters a student must acclimate to. However, once these rules are mastered, all that matters is having fun and gaining as much from the conference as possible, which is exactly what my CMUNCE experience was like."

"I learned so many things in this committee and any committee in general. MUN requires a lot of research and preparation beforehand, and you have to be prepared to debate any facet of the umbrella topic. That means delegates will learn some of the most nuanced facts about anything, ranging from socialist movements of the 60s to military strategies of modern countries. In my Columbia committee, I learned an incredible amount about how divided the leftist movements of the 60s were; even within parties like the Black Panther Party or the Anti-War movement.

You learn so much more than facts in a MUN conference. What I really enjoy about committees is the fact that I am actively applying and practicing skills that are going to make me successful in life. At a conference, delegates are tasked with managing a team, running a room, negotiating and compromising, speaking publicly, resolving conflicts, and thinking about solutions pragmatically. I truly don't know of any other activity that gives anyone, let alone high school students, this kind of training for the future.

As a club, we have to thank our advisor, Mr. Tiedemann, for being so encouraging and supportive through every conference. The online experience is frustrating and difficult, and Mr. Tiedemann is always available to talk to us during the conference when the experience gets to be too much. We appreciate him so much!"

"As the club's VP of Crisis, I was super proud with how the students performed in this conference! For the past few months, we had done many crisis drills and simulations to prepare for this conference and future ones, and it is amazing to see how well the students have caught on and become experts. It is quite an achievement for many of them to do their first crisis and even win an award!"

"Participating in a Model UN Conference is amazing because you get the chance to discuss and debate ideas with people with different perspectives from all walks of life in the hope of coming together to make an impact on the world. Being in a committee strikes the balance between cooperation and conflict in a way that mimics the real-life dynamics between global powers and gives a really incredible look into how the real United Nations operates. I had the opportunity in this conference to be in a three-way committee modeled after the Presidential Election of 1992, and it was a really eye-opening look into how misinformation and manipulation can often influence the direction an election takes. Being in that committee also gave me the chance to meet some really great delegates from other schools that I am still in contact with, which is something you rarely get from other experiences. A Model UN conference if truly a one-of-a-kind experience, and I am really grateful that I got the chance to participate in this one."

"I was in the Doctors Without Borders committee that focused on the Yemen humanitarian crisis. I competed with students from all around the world and we discussed possible solutions to improve safety and healthcare in Yemen. By the end of the committee, I was elected president of Yemen and we resolved the crisis. I also loved hearing about everyone's positive committee experiences and how despite us not being able to attend the conference in person, we all took something away from participating. I am extremely grateful for the opportunity to participate in this conference and our amazing Model UN team."

About the Columbia Model UN Conference

According to their website, the CMUNCE is the premier crisis conference for high school students in the United States. This year, NYCIRCA hosted CMUNCE XX on the Columbia University Morningside Heights campus in New York City from January 14th to 17th, 2021.

The hallmark of CMUNCE is its fast-paced crisis committees, which allow students to react quickly and solve real world problems in international affairs. The conference offers a diverse blend of committees from different historical periods and regions of the world. The committees of CMUNCE are small, most under 25 delegates, to provide students with the opportunity to participate in debate and actively learn.